Note: The following addendum does not appear in the book.

Another disillusioning incident helped to further convince me that, in my youthful naiveté, I had been unwise to place my trust in UFO proponents such as Dr. J. Allen Hynek -- despite his sincerity and basic honesty. I can no longer recall exactly when I learned the truth from Phil Klass about the Jaroslaw "hamburger" UFO photos (see right) taken by two Michigan teenage brothers, but the lesson was shattering. I could still vividly recall the impression the photos had made on me more than a decade earlier when, as a high-school student and pro-UFO activist, I had seen them on the CBS Evening News.

The case was an all-time classic, and is briefly summarized in this January 10, 1967, Associated Press headline story (from the Los Angeles Herald Examiner) that was accompanied by these photos. I have obscured one paragraph, the contents of which shall soon be revealed. [These articles (in the form of slides) were supplied to me by Phil Klass.]

Six days later, in this Detroit News article, Dr. Hynek gave the photos his preliminary (and customary) stamp of approval: "[No] indication of an obvious hoax the similarity these pictures have to other photos I have seen . . . even the 'antenna' shown on the back has been previously reported, as has the tail structure " Hynek's "photographic consultant" was said to be still in the process of studying the originals (the article says "negatives," but these were Polaroid instant prints). And a similar article appeared the next day in the New York Times.

Only years later did the brothers admit to Hynek that they had hoaxed the photos. But between Hynek and his "photographic consultant," one might have expected them to have reached that conclusion in a slightly more prompt fashion. For the proof had been in their grasp (literally) from the beginning.

Take a look at the text that I had obscured from the original AP story, which ran in the newspapers a mere day after the event was said to have occurred.

It turns out that the reporter had found the key to the case's solution that very first day, when he turned the photos over and noted the serial numbers on the back. Each individual piece of Polaroid film in a pack/cartridge is factory-stamped with a unique, consecutive serial number. The helicopter could not possibly have been photographed several minutes after  the "UFO" flew off, as the teenagers had claimed, because the serial number on the helicopter photo revealed that it had actually been taken before  the last of the three "UFO" photographs! (Neither the third "UFO" photo, nor the helicopter photo, appeared in the article.) 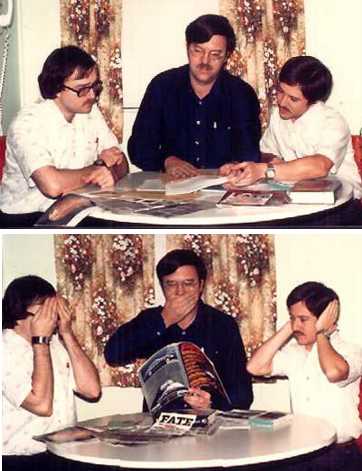 Unfortunately, as I learned only after discovering the works of such UFO skeptics as Phil Klass, Robert Sheaffer and James Oberg, the dogged rigorousness of Hynek's "investigation" of this case was more the rule for the pro-paranormal community than the exception. Whether the subject be UFOs, ESP, or the Shroud of Turin, even investigators with impressive credentials have too often been blinded by the need to believe. Their eyes, and minds, are often closed to even the possibility  that their pet beliefs are unfounded in reality. [Note: Click photos on right for more interesting info.]

The great irony is that we "skeptics" are the open-minded ones. As certain as we may be that UFOs are not ET, that ESP is not really "ES," and that the Shroud is a medieval work of art, we are capable of -- indeed committed to -- changing our minds, should compelling evidence be brought to the fore.

In the 1982-83 timeframe, I engaged in protracted discussions (by U.S. mail) with Marcello Truzzi in an effort to come up with a workable definition of "UFO" (since everyone agrees that not every observed flying object has been positively identified), as well as create a perennial bipartisan committee that would determine which "UFO" cases meet the new definition, assess each case's scientific importance, and issue unanimous conclusions. Phil Klass had warned me that dealing with Truzzi and Hynek would prove futile, and the project ultimately did collapse when Allen Hynek failed to engage. A representative sampling of our letters can be found below -- the final two pages of Part 5 are my unanswered letter to Hynek, and the 6th file consists of a letter from Klass to Truzzi, Truzzi's reply, and Klass' five-page letter of warning to me:
Posner-Truzzi-1.pdf | Posner-Truzzi-2.pdf | Posner-Truzzi-3.pdf | Posner-Truzzi-4.pdf | Posner-Truzzi-5.pdf | Klass_Truzzi_warning.pdf