Having received what she considered "too much attention" following the 1981 shooting of President Reagan (which she has been credited with foretelling, after incorrectly predicting Jimmy Carter's reelection and assassination and Walter Mondale's suicide), Florida "psychic" Noreen Renier decided to make her living as a "homicide detective." Her modus operandi is, however, a bit unconventional -- Renier sits in the comfort of her living room easy chair and performs "psychic" readings on evidence sent to her by the police.

Several times a guest on the Joan Rivers Show, and having also appeared on Geraldo and other national television shows of the "infotainment" genre, Renier graduated to the network newsmagazine level during the May 13 edition of CBS-TV's 48 Hours. In a credulous 8-1/2 minute segment entitled "Hard Evidence," Renier was featured as she offered assistance to two south Florida detectives working on a 1-1/2-year-old unsolved murder case.

With CBS News crews videotaping simultaneously in Renier's home and in the office of detectives Ralph Pauldine and Henry Mackey, reporter Doug Tunnell first explains how Renier "transports herself back to the crime scene and enters the victim's body." Renier then accurately describes the murder scene (a portly, shirtless, middle-aged man, mortally wounded in the neck). The police, Tunnell reports, are convinced that Renier had no advanced knowledge of the case. However, given the choreography required to put this TV spectacle together, a skeptic might suspect that a person with police contacts (such as a professional "psychic detective"), or a national television news department, could have made prior inquiries about the nature of the case to be televised. 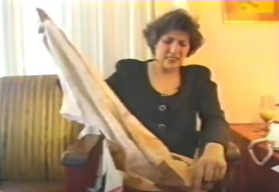 Renier then opens a package of evidence (a blood-spattered towel [right -- click image to watch the show] and beer can believed to have been handled by the killer). Says Tunnell, "Noreen now enters the body of the killer. . . . [and] describes the killer's appearance," as she offers enough of a description to allow a police artist to make a sketch that may or may not bear any resemblance to the real culprit. But when Renier "becomes" the killer, she is unable to discern her own name, though she is able to finger "Wanda," allegedly a prostitute accomplice sporting a butterfly tattoo on her shoulder. Within a week, says Tunnell, police had already picked up for questioning five women fitting that description.

To further bolster the credibility of Renier and of his uncritical journalistic effort, Tunnell also interviews detective Ray Krolak about a 1986 upstate New York murder case. Says Tunnell, "One of the people Noreen led police to was a new suspect. . . . the grandson." The viewer must assume that this was told to Tunnell by Krolak. Geraldo Rivera had made the same claim on his May 30, 1991 show (perhaps the result of a pre-show interview with Krolak?). But the victims' daughter, sitting next to Krolak in Geraldo's studio audience, had responded unequivocally, "[Renier] did not do that. She did not finger my son. She did finger the other two." (They were already suspects.) And Krolak did not contest the accuracy of the daughter's clarification. In fact, though he gushed with accolades for Renier's valuable assistance, Krolak did note that "she more or less reaffirmed what we knew previously . . ."

During the July 16, 1990 Joan Rivers Show, Renier had participated in a panel discussion (along with a newspaper reporter and a criminologist) about New York City's "Zodiac" killer. Renier once again "became" the killer, saying such things as "My beard is now shaved" and "I feel like Spanish is very prominent in me." Gesticulating in all directions, she described how "The bridge is up here. . . . And over here is a traffic light . . . The apartments are over here -- the seventh, eighth story I live on. . . ." She did not specify what bridge, what intersection, or what apartments, and again was inexplicably unaware of her own name, but she nevertheless impressed Rivers, and indicated that she might even contact the police later that day. Indeed, Rivers proudly announced on the following day's show that as a result of that performance, Renier was now working with the New York Police Department on the "Zodiac" case. My investigation, however, revealed otherwise.

A source had given me considerable advanced notice of Renier's 48 Hours appearance, and so on March 26 I had called CBS News, and was referred to 48 Hours segment producer Mitch Weitzner. Although he declined my offer to provide him with skeptical input about Renier, Weitzner assured me that the segment, already completed, would be "balanced." Curious description.

Return to Articles on Noreen Renier