Noreen Renier, once Florida's most famous "psychic detective" before moving back to Virginia in early 2004, is clearly emerging as the darling of Court TV's (now known as "truTV") one-sided Psychic Detectives weekly series. Having been twice featured earlier in the year, her involvement in the Williston, Florida, case was the subject of the September 22, 2004, episode, titled "End of the Road."

I investigated this case intensely, initially at the behest of a producer for A&E Television's series The Unexplained for its January 9, 1997, episode, in which I appeared. My findings were published in several issues of Tampa Bay Skeptics Report (Fall 1996, Winter 1996-97, Summer 1997) as well as in an article for Skeptic magazine (Vol. 5, No. 4, 1997) which in 2002 became a chapter in The Skeptic Encyclopedia of Pseudoscience.

In summary, Norman Lewis, an elderly resident of the tiny town of Williston (just southwest of Gainesville), disappeared on March 24, 1994, and had been missing (along with his red truck) for a year. Only after Renier was called into the case was his body eventually found, submerged (inside his truck) in the murky waters of a deep quarry.

The Court TV program begins with Williston Police Chief Olin Slaughter stating that when police first checked Lewis' house, "There was nothing out of the ordinary no indication whatsoever of foul play." Unmentioned was that Lewis, who suffered from emphysema, had left behind his life-saving inhaler, as well as his wallet.

After an intensive initial search yielded nothing, Slaughter says on the program, "We had to determine if Norman had any enemies gambling debts [problems with] drugs, alcohol, the whole gamut." They found no such evidence. And after a year of fruitless investigation, Detective E. Brian Hewitt (though not mentioned by name), who had recently attended a police seminar in Orlando at which Renier had presented, recommended her for assistance. The Williston police file (case #94-015181), obtained by Tampa Bay Skeptics (which I founded) in 1996 with the assistance of an attorney, contains Hewitt's jotted notes from Renier's reading of July 17, 1995.

Unmentioned on the program was that Hewitt had learned, as documented in his official report dated May 12, 1995 -- two months before Renier's reading -- that three weeks prior to his disappearance, Lewis had confided to a handyman friend that if his life deteriorated sufficiently "he would find a river or pit," i.e., commit suicide in one of the many quarry pits in the area. Hewitt's interview with that friend further reveals that "Norman seemed agitated and dissatisfied with his life," had told his friend "not to get old," and had "made some reference to knowing every rock pit in the county." In fact, Det. Hewitt's name is mentioned nowhere in the show (since he is now deceased, this might be excusable for "production value" reasons in a docudrama, but not in a Court TV documentary). 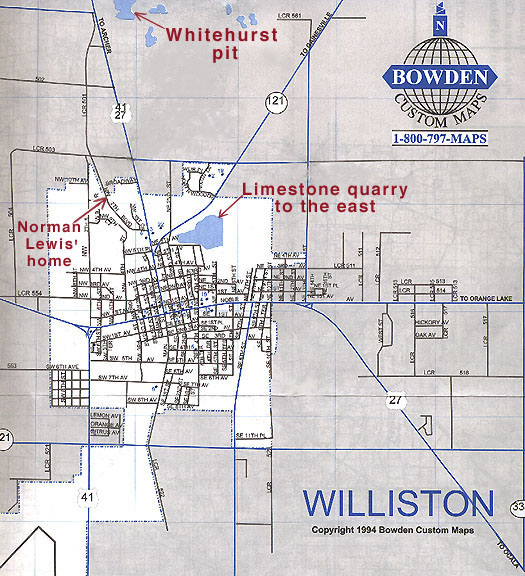 In any event, the show's narrator says that Slaughter instructed Sgt. Bill Baxter to send Renier some items belonging to Lewis, given her ability to "tune into a person by handling objects that belong to them." Some unspecified time thereafter (approximately three weeks, per my timeline, after she was called to set up the appointment), "Renier conducts a reading over the phone. All they've told her about the case is that a man is missing, nothing more." Miraculously, in this TV re-creation of her reading, she divines an "older" man and "a truck red. He's with his truck. If you find his truck, you'll find him." She sees the numbers "45" and "21." The police are said to be "stunned at how dead-on" Renier's reading was. But she had time, if she wished, to research the local newspaper coverage of the disappearance and search, and to obtain maps of the area, as I did. And the most prominent feature on the Williston roadmap is the quarry (labeled "Limestone quarry to the east") located at the junction of State Routes 45 and 121. [Note: That portion of U.S. 41 is also S.R. 45, as indicated on the reverse side of the map.] Indeed, during my investigation in Williston, someone familiar with the case (but who requested anonymity) told me on videotape that this quarry was initially "the prime target for the investigation after the [Renier reading]." But his body was not found there.

Though the police file's paperwork references only a single July 17, 1995, session with Renier, according to the TV show the police conduct a second session at her Orlando home, during which she sees new clues including "a bridge," a pile of "bricks," a "railroad track," the number "22," and the fact that Lewis is dead. And during a third session sometime thereafter in Lewis' Williston home, Renier feels him going "down deep into the water." Renier then asks for a map and "points investigators to an abandoned quarry just north of town" (labeled "Whitehurst pit") where, when the police arrive, "everything is as Renier described it in her vision -- railroad tracks, bricks. But an old abandoned truck scale [which from a certain angle looks just like a bridge] finally convinces them that they are in the right place."

However, Tampa newsman Dave Monsees, in his April 19, 1996, WTVT-TV 13 story about the case, reported the following: "Another clue that amazed Slaughter was that the psychic saw a bridge nearby. Turned out he'd passed it countless times and never saw it -- on the access road to the quarry, an old, wooden truck scale that smacks for all the world of a bridge, if you take the time to stare at it." If true, that clue was actually credited as a "hit" after the fact. The "railroad tracks" clue was also "retrofitted," if the Gainesville Sun article of April 4, 1996, is accurate: "While waiting for the divers, workers near the pit uncovered something they didn't know was there -- abandoned railroad tracks, completing the image Renier had of the location." (Emphasis added.) This article also references only the single July 17, 1995, session.

Toward the show's conclusion, Slaughter retrofits Renier's "21" clue to coincide with Lewis' body being found "2.1 miles from his front door" (a stretch, especially since, in the session audiotape obtained from the police, we hear Renier say "45 miles 4.5 miles"). And he retrofits her "22" clue thusly: "We noticed that [his recovered wristwatch's date indicator] stopped on the 22nd. That's when the hair stood up on the back of my neck."

The narrator says that forensic experts ultimately attributed Lewis' plunge to a "freak accident," oddly ignoring the suicide plan alluded to in Hewitt's interview notes. But, probably of even more importance to this readership, were Noreen Renier's "psychic" clues truly instrumental in pointing the police to the correct watery grave? Though Chief Slaughter swears they were, I remain highly skeptical.