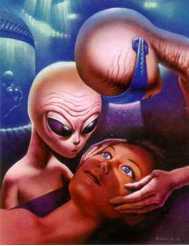 Jacobs thus becomes the most "credentialed" of those purporting that U.S. citizens are being teleported by the thousands (often through their closed bedroom windows) onto UFOs, where gray telepathic entities proceed to humiliatingly probe them (particularly about the genitals) and remove sperm or eggs for some unknown purpose (cross-breeding has been alleged). Fortunately, the horrible "truth" may be recalled later during hypnotic regression sessions with Jacobs or one of his cohorts.

1987 had been heralded in by the publication of two books on this theme -- Communion by Whitley Strieber and Intruders by Budd Hopkins. Hopkins, a New York artist turned UFO abductionist/hypnotherapist, had in 1981 written Missing Time (so named because noting on one's watch that it is later than one thought may constitute evidence of a UFO abduction). The hundreds of new case reports generated by that book and by his subsequent media appearances resulted in Intruders, published by no less than Random House.

Strieber, a writer of horror novels (e.g. The Wolfen, The Hunger and Black Magic), claimed in his "non-fiction" Communion (which also was made into a movie) that he has been abducted on multiple occasions by "the visitors," and examined in the manner described above. His follow-up effort, Transformation, did not sell nearly as well, and he pulled the plug on his Communion Newsletter with the Spring 1991 issue in which he offered this insight: "Hypnotism by UFO experts and the psychologists who support them does not open the door to the truth [but] to fantasies based on the modern folklore of the alien and the flying saucer -- and it opens the door to fear. . . . Ironically, if aliens are here, we are not going to find them in the sky [but] in our own minds."

Leading UFO skeptic Philip Klass of Aviation Week & Space Technology magazine had been pilloried by the UFO community for reaching the same conclusion in his 1989 UFO Abductions: A Dangerous Game. In it, Klass dubs Hopkins "the 'Typhoid Mary' of this tragic malaise" in which, as a result of the abductionists' "games," "some victims . . . will carry the resulting mental scars to their graves." Like Strieber, most victims are "abducted" numerous times throughout the course of their lives, as are their children. Sadly, once initiated into what Klass now refers to as a "cult," neither locked doors nor burglar alarms offer any sense of protection against the unwanted "visitors."

As regards historian David Jacobs, Klass began an August 22, 1980, letter to him this way:

Recalling the number of errors in your book "The UFO Controversy in America" involving my UFOlogical activities, which occurred because you never thought to write, call, or contact me in the course of your "research," errors that I earlier brought to your attention, I would have expected that any future effort on your part to discuss my activities in the field would have attempted to achieve greater accuracy. My expectations . . . were not realized when I read your contribution to the new Warner Books paperback "Proceedings of the First International UFO Congress." May I cite a few examples . . . [Klass then cites eight examples, and in a letter to Jacobs dated November 25, 1982, noting that "I have never received a response," he cites 13 more.]

Jacobs and I go back some 14 years to when I attended a talk on UFOs by him at Loyola College in Baltimore, where I then lived. Within moments of commencing his presentation, I raised my hand to offer a correction. After my so doing a second time a few moments later, I asked if future such comments should be held until the end. A game trouper, Jacobs invited me to raise my hand at will, and I must have done so a dozen times during the course of his talk (I was apparently the only well-versed attendee, and the only one with questions/comments). The error I remember most vividly related to the famous 1971 Delphos, Kansas, "UFO landing trace" case, in which a ring of white substance purported to be UFO propulsion residue (but later determined to be natural organic matter) was allegedly left behind on the soil, which had been muddied by recent rains. In Jacobs' telling of the tale, the white ring became "the only area of the yard where the snow didn't melt."*

O.K. You may think I'm being a little picky. But what distinguishes Jacobs' research from that of the other "abductionists" are his academic credentials in the field of historical truth. Jacobs may be a fine college history teacher, but what he taught me that day 14 years ago only serves to reinforce my skepticism of the historical reality of "UFO Abductions."

* January 2007 Clarification: It would seem that Dr. Jacobs was partially correct, and I regret not having been aware of this until informed today by a reader. According to this write-up, although the white ring was indeed determined to be natural organic matter, snow (coincidentally white as well) purportedly was noted to melt more slowly immediately above the organic matter than from the ground adjacent to it.

Read my article on the Gulf Breeze UFOs

Read my interview with Philip Klass