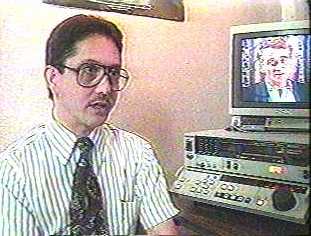 On November 1, Ch. 10 news director Mel Martin called me about John Monti, a "psychic detective" from New York who had just arrived in Florida to solve the Tiffany Sessions disappearance case. A skeptical Martin wanted input from the Tampa Bay Skeptics, and my fifteen seconds on the news that night (see right -- Monti is shown on monitor) was better than nothing  which, predictably, was the value of Monti's "psychic" detective work.

During Monti's November 4 appearance on Ch. 13's "Eye on Tampa Bay" (later renamed the "Kathy Fountain Show") I remarked (by phone) that several months prior, he had failed to solve a similar case in New Jersey. Monti's response: "The mother did not want to find the child. . . . A New York Times article stat[ed] that the mother was suspicious [sic] of doing something with the child. . . . I can do so much as a psychic, but I'm not going to tell parents what to do with their kids -- I can't take their kids away from their parents."

Monti's "job" was not to take the already missing child away from the parent, but to solve the case via "psychic power" (not  by reading the N.Y. Times). Detective Sgt. Ray Durski of the South Amboy, N.J., Police Department told me of Monti's efforts:

"He gave us about four different locations. . . . He had strong feelings that the boy had been in an abandoned building. . . . We went through the entire building and found no articles of clothing [that he suggested we might find]. The following day he suggested an area near a railroad track where he had strong feelings. . . . We searched that area and there was nothing there also. He then contacted our South Amboy First Aid Dept. and gave them strong feelings that we could possibly find a body in a landfill area adjacent to the waterfront. They then conducted a search with over 100 people and they found nothing there. After that, he came back again, and he stated that he sees the boy running away from the mother's house in the direction of the railroad tracks. Of course we checked that area, too, and came up with nothing."

Durski added, "We more or less believed in him to a certain extent, and we didn't discount any of his leads. He came on strong at first [but] I don't think he helped us whatsoever. . . . After all the publicity and the news coverage subsided, so did he."

When I asked about the mother's refusal to cooperate with Monti, Durski responded, "I think what happened was that after the first meeting at the grounds [where the boy disappeared], I think more or less that the mother became very skeptical of him. . . . I think she probably didn't approve of what he was doing." About Monti's allegation that the mother doesn't want the child found: "That's a new twist." Does Durski agree that her behavior has been suspicious?: "No, I don't."

Monti's "shotgun" approach is typical of "psychic detectives" -- create so many "leads" that one of them can be claimed, in retrospect, close enough to be a "hit." Obtaining information from newspapers and/or family members, and then feeding it back "psychically," is another standard ploy. And if the case isn't solved, find some excuse. These tactics have convinced many police officers, and even some FBI agents, that "psychic detectives" are worth consulting, even if only as a last resort. To their credit, neither the police nor Tiffany Sessions' father would have anything to do with John Monti. But the mother, although disappointed by the "psychics" that she had previously consulted, publicly expressed her faith in Monti, and the two of them (with a TV crew) spent November 6 and 7 in Gainesville, in a vain search for the long-missing girl.

I wish Monti had  succeeded, and would have awarded him the Tampa Bay Skeptics' $1,000 prize. But I could have predicted (and did) that his "psychic power" would fail him once again.

More on "Psychic Detectives" from The Skeptic's Dictionary