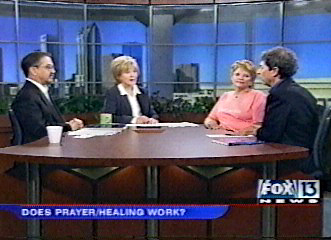 In the Green Room after the program, Gordon performed a demonstration of "Quantum-Touch," and in so doing made it painfully obvious that he was just fooling himself (or trying to fool me). Using his "local representative" as the patient, he first had her face away from us. He then placed his left and right index fingers across the top of her left and right hip bones (iliac crests) respectively, showing me how the right was a bit higher than the left. He had me do the same, confirming that the right was indeed slightly higher than the left. He then laid on his hands and performed his "Quantum-Touch" for several seconds. When he placed his fingers across the tops of her hip bones again, this time they were level, proving that he had "healed" her condition. However, when I then placed my fingers again, I still found the right side higher than the left. Gordon then pulled my right finger back an inch or two, causing it to become level with the left. But all that did was move my finger from the apex of the iliac crest to a point slightly lower along its posterior curvature/slope.

Unfazed, Gordon and his local rep took my cards and agreed to entertain the possibility of returning to Fort Lauderdale, Florida, within a year to try to perform a more convincing test, for both the Tampa Bay Skeptics' $1,000 Challenge and the James Randi Educational Foundation's $1-million Challenge.