A version of this article appeared in the Winter 1986-87 issue of Free Inquiry  magazine.
My investigation was summarized on pages 291-292 of James Randi's The Faith Healers
as well as from 5:15-6:10 of a video titled How a Faith Healer Scammed America.
Nonhealing a Nonexistent Tumor
by Gary P. Posner, M.D.

Seldom do we have the opportunity to examine critically a claim of faith-healing in which an incurable medical condition is definitively diagnosed, a prayer is offered, and the affliction is "miraculously" healed, with resolution of the confirmatory x-ray findings. Such a claim was made in a riveting and moving video segment of the Peter Popoff Miracle Ministries program (which aired in St. Petersburg/Tampa on August 17, 1986). 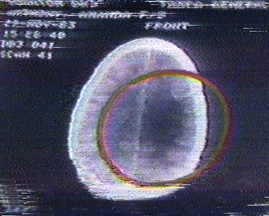 On that tape, introduced by the Reverend Popoff as the story of a "miracle" in the life of a little girl with an "inoperable brain tumor," we see the adorable face of Amanda A. (last name withheld in this report at the mother's request), who suffered from migraines that had prompted an x-ray series known as a C.T. brain scan to be performed on November 29, 1983, at Tampa General Hospital. An image from the scan is shown (see right), containing an unmistakably dark, shadowy area on the left (viewers' right), described by the narrator as a "brain stem tumor." This diagnosis, we are told, was "confirmed" by "doctors at the University of South Florida [Tampa] and John [sic ] Hopkins." A second scan is then said to have established "the same diagnosis a brain stem tumor. There is no treatment. No radiation, no chemotherapy, no surgery will help."

We are then introduced to Amanda's grandmother, whose photo is shown and whose voice (or so we are to assume, but more on that later) informs us, "That's why Mandy was having these migraine headaches." At this point, with all of Amanda's physicians (and x-rays) confirming the presence of an untreatable, incurable "brain stem tumor," we hear that the grandmother mailed a "prayer request" to the Reverend Popoff. "A couple of weeks later," she explains, in a voice choked with emotion, another C.T. brain scan was performed and "the tumor in Mandy was gone!" The narrator concludes: "The doctors can't explain it. For them, it's a mystery. But for Mandy and her grandmother, it's no mystery. Jesus completely healed her, and here is the scan taken December 12 [1983] to confirm it." An image from that scan is shown, and indeed appears normal. (I should note that neither image shown was of the "brain stem.")

My investigation consisted of interviews with Amanda's mother, several of the physicians (including the radiologists) involved, as well as a review of all of Amanda's medical records and x-rays.1  When I played the Popoff tape for the mother, who was not aware of its existence or airing until my initial contact with her, she was understandably upset that Popoff would exploit her daughter in this manner. Mrs. A. had known for several years that the shadowy area on the November 29 scan was not a tumor. In fact, Amanda's physicians (including the radiologists) were in agreement by early 1984 that it was only an artifact in the scanning process (as it appeared throughout all levels of the left side of the brain, and was not confined within any particular anatomical structure).

Amanda had been suffering from migraines, affecting the muscles of her left eye, since the age of thirteen months (she is now eight years old). Migraines, caused by exaggerated constrictions and dilations of cerebral arteries, should not be associated with any anatomical abnormalities on a C.T. scan. In fact, at the age of twenty-six months, during her first complete neurological evaluation, a C.T. scan had been performed on Amanda and was negative, as expected.

But in November 1983, because of a disturbing loss of vision in the affected eye, Amanda's pediatric ophthalmologist at USF ordered another scan. Although confident of his diagnosis of "ophthalmoplegic migraine" (her symptoms were classic), he dared not risk overlooking some other possible problem that might be apparent in an x-ray. Yet he was surprised and perplexed when the radiologist described "an area of low density on the left. A very minimal mass effect [i.e., swelling] may be present [emphasis added]. Possibilities would include neoplasm [tumor], demyelinating disease [e.g., multiple sclerosis] and perhaps degenerative white matter disease. The picture is not typical, however, for any of these." No discrete tumor was described, even following injection of contrast dye in Amanda's vein (intended to enhance the appearance of any highly vascular lesion such as a malignant tumor). As noted in the radiologist's report, "neoplasm would be difficult to postulate without enhancement." 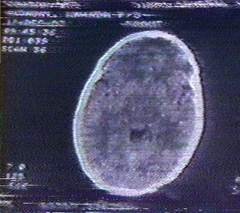 To help determine with certainty whether or not a surgical lesion was present within Amanda's brain, she next was evaluated by a Tampa neurosurgeon on December 5, who also noted the "area of decreased density on the left of uncertain etiology." A repeat scan with additional views was ordered to rule out the possibility of a tumor, and as noted on the television program, the dark area was no longer apparent (see right). Amanda then visited a pediatric neurologist at USF on January 11, 1984, who concurred with the diagnosis of "ophthalmoplegic migraine." He reviewed both C.T. scans, and noted the "lucency or edema" on the first, remarking that "a mass was not seen" [emphasis added].

If a team of highly skilled physicians can be rendered at least a bit confounded by an unusual-looking scan, imagine the apprehension of the mother of the patient. Desiring still another independent opinion, Mrs. A. decided to take her daughter to Johns Hopkins Hospital in Baltimore. Amanda and her scans were examined there by a pediatric neurologist on January 26, 1984, who, although noting the "low-density area" on the November scan, agreed with the diagnosis of "ophthalmoplegic migraine." As an additional theoretical consideration, he did mention the possibility of a "very small optic glioma [tumor] not observable on CT scan" [emphasis added].

After informing Popoff's staff in December 1983 that Amanda's followup scan was normal, and assuming that a "miracle" had occurred as a result of her prayer request, Amanda's grandmother agreed to a visit by a Popoff representative at her home in Tampa. At that meeting, she allowed photographs of Amanda and herself to be taken for use in a planned article in Popoff's newsletter. At the mother's urging, she specifically denied permission for videotaping for television.2

Because none of Amanda's physicians could correlate her brain scan anomaly with the findings of her physical examination, or explain its sudden disappearance, a reexamination of her scans by the Tampa General radiology staff was requested and undertaken. Finally, as the original radiologist and a neuroradiologist now observed, the telltale artifactual nature of the ubiquitous left shadow became apparent.

It is clear that Peter Popoff's televised claim of a documented "miracle," nearly three years after the fact, is without foundation. Had Popoff bothered to check his "facts" with the mother, or with any of Amanda's physicians, before televising his account (without permission), he would have discovered that no tumor had ever been documented. Nor, unfortunately, has there been any decrease to this day in the frequency or severity of Amanda's migraines, or their neurological consequences.

Amanda's grandmother, once a regular financial contributor to the Popoff ministry, no longer supports his efforts. Amanda's mother is contemplating legal action. And, by the way, the emotional voice on the tape is not that of the grandmother! Perhaps, just perhaps, it is the voice of "God" (a.k.a. Elizabeth Popoff -- see this YouTube video).3

1. As of this writing, the grandmother has declined to be interviewed for this article. The mother has confirmed in writing the accuracy of my comments as they relate to the grandmother, based upon her firsthand knowledge.

2. For reasons of family harmony, it was imperative that Mrs. A.'s husband know nothing of the Popoff involvement. Televising the story was out of the question, though a limited-circulation newsletter article was acceptable.

3. The reference to Elizabeth Popoff as the "voice of God" relates to James Randi's exposé of Popoff's use of a miniature radio receiver in his ear during his faith-healing performances, into which his wife would transmit the information that Popoff ostensibly divined miraculously.